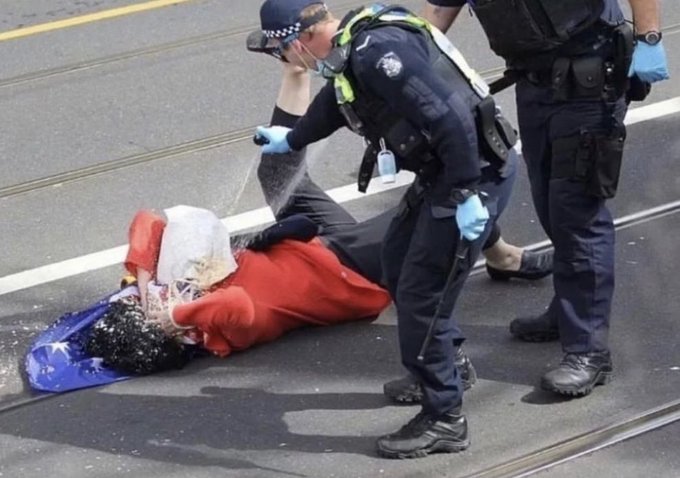 This article comes from Genocide Watch. I have added my own notes to highlight the genocide which is being perpetrated today under the guise of “covid health measures”. Original content is also edited for length and relevance.
“The process [of genocide] is not linear. Stages may occur simultaneously. Logically, later stages must be preceded by earlier stages. But all stages continue to operate throughout the process.

➔ 1. CLASSIFICATION: All cultures have categories to distinguish people into “us and them” by ethnicity, race, religion, or nationality.

With covid, “us and them” means “vaccinated versus unvaccinated” or more broadly “those who follow the covid rules vs. those who don’t”.

➔ 2. SYMBOLIZATION: We give names or other symbols to the classifications. We name people, or distinguish them by colors or dress; and apply the symbols to members of groups. Classification and symbolization do not necessarily result in genocide unless they lead to dehumanization. When combined with hatred, symbols may be forced upon unwilling members of pariah groups.

The mask was the first classification symbol imposed. At the same time, hatred between pro mask and anti mask people was encouraged. Masks themselves are a dehumanizing symbol, they have been used throughout history to punish and control human slaves. They are strictly a symbol denoting slavery. Note that VIP celebrities can attend parties and events unmasked while their servants are still expected to wear masks.

Vaccine passports are also symbols. Like the masks, they are a display of who is compliant with medical totalitarianism and who is not. Media propaganda promotes the idea that the vaccine compliant belong to a higher level of society with more rights than those who lack the passports.

➔ 3. DISCRIMINATION: A dominant group uses law, custom, and political power to deny the rights of other groups. The powerless group may not be accorded full civil rights, voting rights, or even citizenship. The dominant group is driven by an exclusionary ideology that would deprive less powerful groups of their rights. The ideology advocates monopolization or expansion of power by the dominant group. It legitimizes the victimization of weaker groups.

Vaccine passports and mask mandates are both examples of discrimination. Unvaccinated people are denied the right to socialize with others and use public services. The exclusionary ideology is reinforced by state propaganda and news media, publishing an endless stream of hate speech and falsehoods against the unvaccinated. The discrimination always progresses, with the dominant group cancelling more and more rights of the unvaccinated.

➔ 4. DEHUMANIZATION: One group denies the humanity of the other group. Members of it are equated with animals, vermin, insects or diseases. Dehumanization overcomes the normal human revulsion against murder. At this stage, hate propaganda is used to vilify the victim group. The majority group is taught to regard the other group as less than human, and even alien to their society. They are indoctrinated to believe that “We are better off without them.” The powerless group is equated with filth, impurity, and immorality. Hate speech fills the propaganda of official radio, newspapers, and speeches.

Clearly the unvaccinated and other covid dissidents are being systematically dehumanized with covid as the excuse. Unvaccinated people are accused of being unclean disease vectors, blamed for every new infection, and calls are made for them to be denied health care and social assistance.

The media are increasingly full of hate propaganda against the unvaccinated. In Canada today a fake poll was recently plastered all over the major media outlets, claiming that most people hate the “selfish and irresponsible” unvaccinated.

Today the “militias” take several forms. Antifa, BLM and groups like them are financed, aided and abetted by Western state governments. Their violence is ignored or encouraged while their peaceful opponents are blamed and punished for violence. Hordes of violent, murderous “refugees”, all fighting aged men from hostile societies, are brought from the third world to Western countries to create chaos. Every major power has secret police and specially trained military which can easily be used to oppress dissidents. Municipal and state police forces are also filling the role of secret police, persecuting covid dissidents, especially in places like Australia and the UK. Police state oppression is backed up by mass censorship and surveillance.

➔ 6. POLARIZATION: Extremists drive the groups apart. Hate groups broadcast polarizing propaganda. Motivations for targeting a group are indoctrinated through mass media. Laws may forbid intermarriage or social interaction. Extremist terrorism targets moderates, intimidating and silencing the center. Moderates from the perpetrators’ own group are most able to stop genocide, so are the first to be arrested and killed. Leaders in targeted groups are the next to be arrested and murdered. The dominant group passes emergency laws or decrees that grants them total power over the targeted group. The laws erode fundamental civil rights and liberties. Targeted groups are disarmed to make them incapable of self-defense, and to ensure that the dominant group has total control.

This is more of what we’re already experiencing. The polarizing propaganda has already begun, and it’s getting worse. Mass media is already encouraging the targeting of the unvaccinated using scapegoating tactics like claiming that everyone in the ICU is unvaccinated. Laws enforcing masking and distancing along with vax passports already discourage social interaction between the compliant and the noncompliant. “Moderates from the perpetrators’ group” aka politicians, doctors and other influential people who question the medical Apartheid system are being “cancelled” and losing their jobs and livelihoods. Leaders of the anti vax/anti mask groups along with Christian clergy are already being targeted by police. The “emergency” laws granting governments unlimited powers and revoking human rights were passed in early 2020. To this day “emergency” is used as the excuse to perpetrate a plethora of human rights abuses. And, many Western countries including the US and Canada are on the verge of drastically tightening gun control laws.

➔ 7. PREPARATION: Plans are made for genocidal killings. National or perpetrator group leaders plan the “Final Solution” to the targeted group “question.” They often use euphemisms to cloak their intentions, such as referring to their goals as “ethnic cleansing,” “purification,” or “counter-terrorism.” They build armies, buy weapons and train their troops and militias. They indoctrinate the populace with fear of the victim group. Leaders often claim that “if we don’t kill them, they will kill us,” disguising genocide as self-defense.

Again, the plans for genocide have already been made and are being carried out. The public is already being groomed to believe “it’s us or them”. The incarceration facilities are ready to be filled with prisoners. In Australia they now have “Green zone” camps, ostensibly for quarantine but really to incarcerate, punish and murder covid dissidents and political enemies of the state. I already mentioned Canada’s gulags which are both abandoned hotels and camps at military bases. The US has Guantanamo Bay and other facilities. Covid genocide euphemisms include “quarantine” (purification) and “public health risk”. Very soon, those who continue to refuse to be vaccinated will find themselves designated as “public health risks”, their assets will be confiscated, and then they will be incarcerated in “quarantine facilities” in order to “protect the public from covid” and “spare the overcrowded hospitals”.

➔ 8. PERSECUTION: Victims are identified and separated out because of their identity. Death lists are drawn up. In state sponsored genocide, members of victim groups may be forced to wear identifying symbols. Their property is often expropriated. Sometimes they are even segregated into ghettoes, deported into concentration camps, or confined to a famine-struck region and starved. They are deliberately deprived of resources such as water or food in order to slowly destroy them. Programs are implemented to prevent procreation through forced sterilization or abortions. Children are forcibly taken from their parents. The victim group’s basic human rights become systematically abused through extrajudicial killings, torture and forced displacement. Genocidal massacres begin. The perpetrators watch for whether such massacres meet any international reaction. If not, they realize that that the international community will again be bystanders and permit another genocide.

Unvaccinated people are identified and separated out using vaccine passports. Death lists will be easy to create, they just have to see who’s not on the vaccine passport list. Soon there will be rules allowing the vaxed to go without masks so that those who are still masked can easily be identified. The Great Reset website already announces the upcoming expropriation of property. I already mentioned the gulags standing ready to incarcerate the noncompliant. Deprivation of resources already started in 2020 and will get worse. It will take the form of extreme inflation as well as manufactured shortages, vital service shutdowns, and blockades. The vaccine is already sterilizing people. Children of noncompliant parents have already been apprehended by the state. Children in general are being targeted with human rights abuses like forced masking in schools. They are also being targeted as the next vaccine victims despite their relative immunity to the covid virus.

Human rights abuses are already in progress and getting worse (see Australia). Genocidal massacres have already been perpetrated in “care” homes around the world. They are also caused by the deliberate misuse of ventilators and psychiatric drugs on covid patients in hospitals. Massacres will continue in the form of deaths and miscarriages caused by the vaccines. Australia is the testing ground for new human rights abuses and massacres. The international community has turned a blind eye, which is tacit permission for the abuses to continue and get worse, as well as spread to other countries.

➔ 9. EXTERMINATION begins, and quickly becomes the mass killing legally called “genocide.” It is “extermination” to the killers because they do not believe their victims to be fully human. When it is sponsored by the state, the armed forces often work with militias to do the killing. Acts of genocide demonstrate how dehumanized the victims have become. Rape is used as a tool of war to genetically alter and eradicate the other group. Mass rapes of women and girls have become a characteristic of all modern genocides. Destruction of cultural and religious property is employed to annihilate the group’s existence from history. Civil wars may break out which do not differentiate civilians and combatants. They result in widespread war crimes. All men of fighting age are murdered in some genocides. In total genocides all the members of the targeted group are exterminated.

This is the future for those who refuse to comply with the dominant group. Extermination is the natural result of ongoing dehumanization. Unvaccinated people are increasingly viewed as health hazards and disease vectors rather than human beings. Mass rape and violence by imported hostile migrants will be used as a control and to pollute the White genome. Cultural and religious properties are already being vandalized and destroyed. History is being erased by cultural Marxists. Civil wars will break out, provoked by the dominant class and their violent shock troops.